2-blade vs 3-blade and 4-blade propellers

The question of the efficiency of multi-blade propellers always comes up and the answers are somewhat more straight-out than they should.

First of all, we need to understand what is the efficiency of a propeller, when talking about airplanes. The efficiency is the ratio between an output power and an input power.

The output power can be seen as the ability of the propeller to produce a given thrust (N) at a given airspeed (m/s). This airspeed is the one measured far in front of the plane, it is the speed of the air incoming to the propeller.

Now the efficiency (also called eta from the greek letter) is the ratio between those two powers :

We can notice that with this definition the propeller efficiency in static is equal to zero : the plane is not moving so there is no useful work produced by the propeller. "Useful" has here some kind of an "economical" definition.

The efficiency curve of a propeller looks like this (from UIUC database) : Eta is plotted against J, the advance ratio.

J = v/nD, where v is the incoming airspeed (m/s), n is the rotational speed (rev/s) and D is the propeller's diameter (m). The advance ratio J can be seen, more or less, as an expression of the angle of attack of the blades. If we consider that D is fixed and n is nearly constant in flight then J gives a picture of efficiency versus airspeed.

We see that the efficiency of the propeller is not constant, and it has a peak at a given ratio of airspeed and rpm (and diameter). An important point is then that a propeller may have an excellent peak efficiency but a poor efficiency in flight because it is operating far from the optimal J. We can also simply look at a range of J giving a satisfying efficiency and that should correspond to the range of the most important flight conditions.

So when we talk about the propeller efficiency, we are searching the best propeller that would produce the required thrust at the required velocity with the lesser shaft power.

Why is thrust needed ? in order to fight against drag and weight when climbing.

I understand that it looks like we need to calculate all this (rpm, thrust, shaft power, drag, etc.). And it can be done. But now we simply need to understand what is under the word efficiency.

Now, what 2-blade, 3-blade or 4-blade propellers should we compare to each others ?

Obviously, if efficiency corresponds to particular (in flight) conditions of required thrust and velocity, then we should compare propellers that are producing more or less the same work. Whatever the number of blades, they should produce the same thrust at the same velocities. We can also add the fact that the static thrust (when hand-launching, or at take-off) should remain in the same range. The plane should have the same performances, in cruise, climb and normal evolutions, etc.

Thrust production as well as power consumption are linked to the blade's area. We understand that if we add blades we'll probably need to reduce the blade's area in order to keep thrust and power in the same range.

In fact, all this is very well explained on aerotools (equivalent multiblade propellers).

There is two solutions to keep the power equivalence : reduce the blade's chord length or reduce the propeller's diameter (or both of course).

So here, we are not comparing propeller on which we simply add one or two more blades. When going to 3-blade or 4-blade from a 2-blade propeller, we need to change the blade's shape.

How is the efficiency affected by the number of blades ?

There is no short answer ! An argument that is commonly put forward in the RC community is the fact that the air in the wake is more disturbed when the number of blades is increased, and that's leading to a decreased efficiency.

Here is what is said on aerotools (Martin Hepperle) about the number of blades :

The number of blades has a small effect on the efficiency only. Usually a propeller with more blades will perform slightly better, as it distributes its power and thrust more evenly in its wake. But for a given power or thrust, more blades also mean more narrow blades with reduced chord length, so practical limits have to be considered here. The chord length can be increased while decreasing the diameter to keep the power consumption constant, but a diameter reduction is usually a bad idea in terms of efficiency, as long as the tip mach number or tip cavitation is not an issue.

So who should we believe !!? my preference goes to the last one, but everybody is free to believe what he wants of course !

The other point is the diameter reduction. This leads to a reduction of the aspect ratio of the blade and higher tip losses that can reduce efficiency, just like a small aspect ratio causes higher induced drag on an airplane wing.

Then we have chord reduction, on the opposite of diameter reduction, this leads to a higher aspect ratio and higher efficiency. The applet proposed by Martin Hepperle on aerotools, javaprop, shows this fact. When going from 2-blade to 3- or 4-blade, the software keeping power equivalence and diameter, the peak efficiency is a bit increased. But by doing this in javaprop we may have forgot the Reynolds number effects.

Now, a look at some airfoils polar (from UIUC - Low speed airfoil data - volumes 1 and 3) : 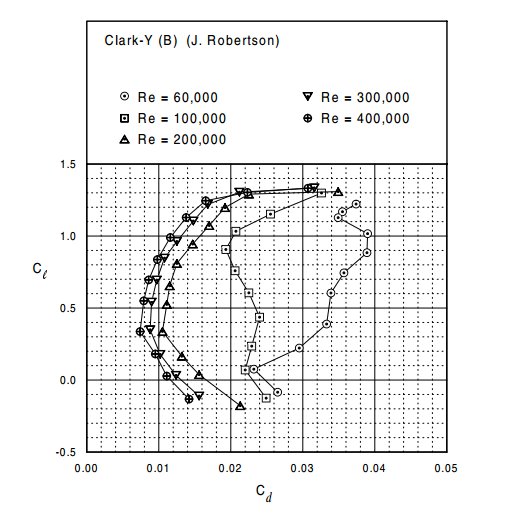 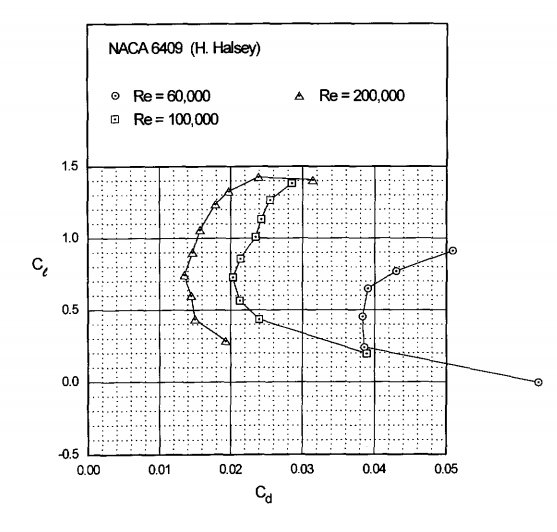 We can see that our propellers are operating in a range where the Reynolds number can rapidely affects the blade airfoil's performance. So a blade chord length reduction may lead to severe reduction in propeller efficiency.

Usually, what we do when selecting a 3- or 4-blade propeller is see what a 2-blade one would do and choose a 3- or 4-blade propeller of the same pitch but of reduced diameter, by doing this with propeller from the market we obviously reduce both diameter and chord length, aspect ratio staying more or less about the same. So, we may have some elements in favor of efficiency and some others to the detriment of it. My opinion is that the result is more to the detriment of efficiency, especially for very small propellers.

But there is not only purely physical elements that affects the propeller efficiency. By reducing the diameter and keeping the same pitch, we also change the pitch to diameter ratio (P/D ratio).

This ratio has an influence on the peak efficiency of the propeller (from UIUC database) : 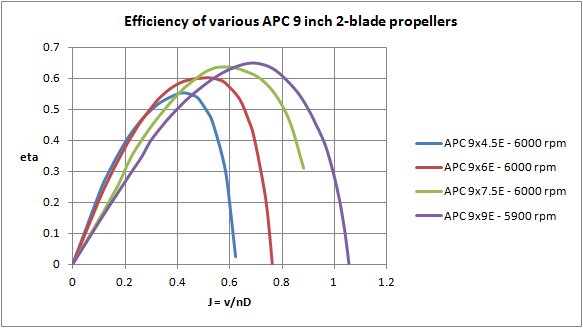 In going to a 3- or 4-blade propeller, we increase the P/D ratio. This may limit the efficiency losses by a small amount, but that's not guaranteed.

IN CONCLUSION : there is no clear answer ! in fact the efficiency may be badly affected by an increase in blade number, especially with the smallest propellers. But the exact amount of the losses can't really be known, and it will probably not impact much the airplane performance.

What about testing propellers ?

The main difficulty comes from the fact that it's really hard to find 2-, 3- and 4-blade propellers producing the same work. An in flight test may lead to wrong conclusions because of other factors than the propeller itself.

I haven't found interesting papers about multi-blade propellers, at RC size. But I used to test some propellers in my homemade wind tunnel :

All this tests show a severe impact on efficiency.

But they are limited to small propellers with diameter of 8 and 9 inches. One can hope better with diameter up to 14 inches or more.

My software tetacalc allows to make some simulations of the performance of one of my plane if it was equipped with the tested propellers.

The simulation also take into account the behavior of the all power system (motor, battery, etc.).

For example, this plane, equipped with an APC 9x6 thin electric, 9x6 sport or the 4-blade 9x6. The simulation shows that the 4-blade can't even reach the performance of the 2-blade propellers because the high power consumption reduce considerably the rpm ! 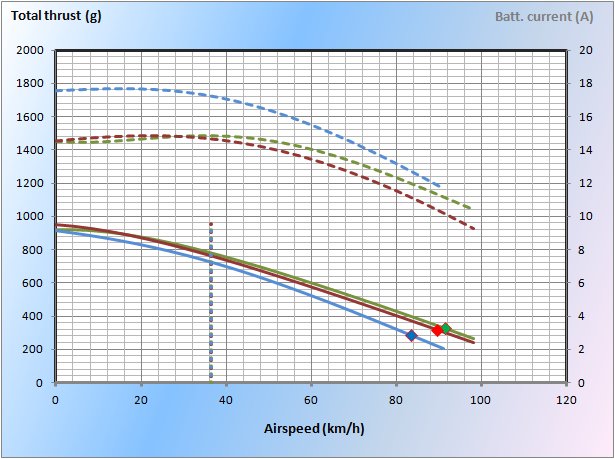 But this may be a worst case example.

If we compare the GWS 9x5 2-blade and 3-blade propellers : 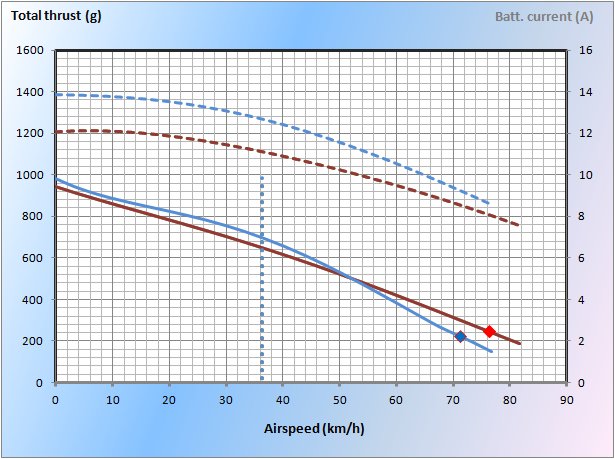 The performance are about the same (not increased with the 3-blade as one should believe) ! but power consumption is higher.

IN CONCLUSION : we probably lack of some good in flight tests, but the theory tends to say that increasing the blade number may lead to a decreased efficiency. The few wind tunnel tests I've made tends to prove that this decrease can be severe. Avion résistant au vent
APC propeller data - what's new ?
Bipale contre tri et quadripale
Retour à l'accueil
Commenter cet article
C
chitra
24/10/2019 03:04
You are so hot baby. Like your project. ooolaa. THis is not chitra is her daughter me samantha. Love you so muck
Répondre
R
Richard
01/02/2017 11:25
The conclusion could be different under the condition of 450 3D acrobatic helicopter. Because the angle of blades are adjustable. For the fixed angle of propeller the possible conclusion could be the more blades the lesser blade angle should be, flying stability should be higher than lesser blades.
Répondre
F
fgdfg
01/01/2017 09:31
nice explanation
Répondre